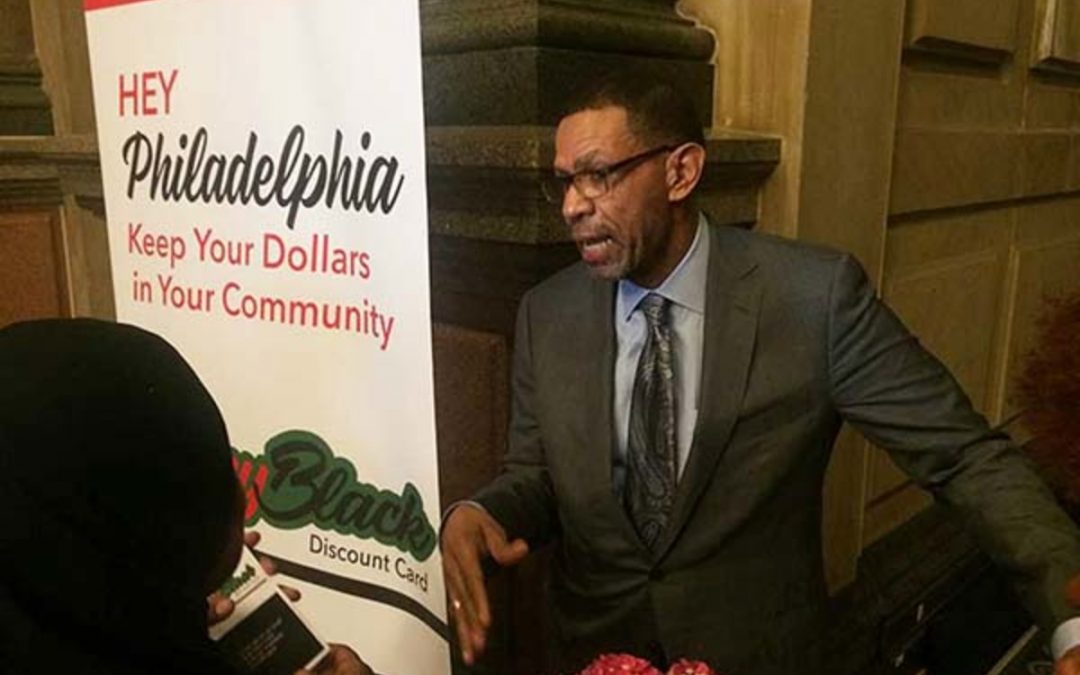 About 80 business owners already have signed up to participate and accept the “iBuyBlack” card, sponsored by the Philadelphia Community of Leaders.

“We heard about a similar model in Detroit, so we borrowed from them,” said Michael Rashid, former president and CEO of AmeriHealth/Caritas.

“Economists say the average dollar earned by blacks stays in our community for just six hours,” Rashid told a packed audience assembled on the fourth floor of City Hall. “Compare that to the white community, in which dollars circulate for 17 days. That’s wealth-building.

A broad coalition of Philadelphia leaders, City Council members, and business owners got behind development of the iBuyBlack card, which costs $10 and offers discounts of up to 15 percent every time cardholders shop at local companies.

“Our goal is to recruit 500 businesses and 10,000 Philadelphians to purchase the iBuyBlack discount card by the end of this year,” said Earl Harvey, sales director for iBuyBlack.org and a member of the African American Chamber of Commerce. Currently, there are about 1,500 cardholders.

Proceeds from the cards will go to support the Philadelphia Community of Leaders (PCOL), which hosts annual civic events such as Juneteenth, the June commemoration of the end of slavery in America.

Rashid, who with his wife owns and operates MECCA Child Care Academy on Limekiln Pike in Philadelphia, said cardholders would get discounts upon registration.

“That’s a money-saver right up front,” he said.

Ebin Qadir, owner of Alpha to Omega Termite & Pest Control on Haverford Avenue, said he had heard about the iBuyBlack card through PCOL and planned to join and offer the maximum 15 percent discount to customers.

“It’s really good exposure for our business, and it’s the first time I’ve ever done something like this,” he said of his 37-year-old West Philadelphia-based company.

Lin Thomas, chief executive of Supra Office Solutions in West Parkside, is considering joining because “as an accountant, I recognized the need for improved economics for African Americans. It’s a clear plan and an honest commitment.”

Rashid argued that “if we spent 9 percent of our collective dollars with black-owned businesses, we could employ every single man, woman, and child within the black community. Unemployment could be wiped out.”

Sullivan was a Philadelphia civil rights icon who fought apartheid in South Africa and encouraged black economic development at home. Sullivan Progress Plaza, which got a historical marker last year, was the first U.S. shopping center to be developed, owned, and operated by African Americans. Boycotts he organized helped integrate the ranks at major corporations such as Tasty Baking Co. and Coca-Cola and opened thousands of jobs to African Americans.

For more information on the program visit www.iBuyBlack.org.